Hannity: Biden was unable to hold Putin accountable for anything

Fox News host Sean Hannity opened his show "Hannity" on Wednesday by slamming President Biden's "so-called" summit with Russian President Vladimir Putin, specifically for not participating in a joint press conference after the meeting and appearing to "appease" the hostile leader.

The closed-door meeting took place Wednesday afternoon and both leaders held separate press conferences with many taking issue with Putin being allowed the "massive" platform.

"Let’s be clear, the so-called summit with Vladimir Putin did absolutely nothing to advance any American interests in any way. That's a fact," Hannity said. "Instead, Vladimir received a massive platform in exchange for zero concessions whatsoever and then Putin used that platform to take shot after shot after shot at our country, the United States of America."

Hannity also accused Biden of being "afraid" of standing side-by-side with Putin during a press conference, saying "Joe, of course, was nowhere to be found correcting the record, because he was afraid to stand next to Vladimir, probably because he is not capable of doing it." 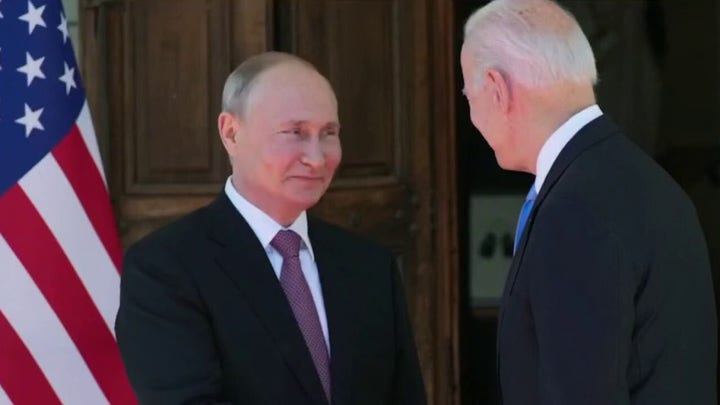 In addition to blasting the president's demeanor, Hannity went on to criticize Biden for not pressing the Russian leader on cybersecurity. During recent weeks suspected Russia-based actors have committed cyberattacks on key industries in the United States including energy and food supply.

"Putin did not commit to ending the cyberattacks against our country. He didn't take responsibility for the hijacking of over 100 U.S. companies, 9 federal agencies."

Hannity also went after Biden for failing to make any agreements regarding the Putin regime's ongoing human rights violations.

"He did not agree to free Americans, now wrongfully imprisoned, in his hostile regime of Russia. He didn't take responsibility for the Havana syndrome attack against U.S. diplomats, he didn't agree to stop poisoning and killing his political enemies. He didn't agree to curtail his military aggression in Eastern Europe and around the world."

Jennifer Golotko is a YouTube Producer with Fox News